Nakhon Phanom has become a base to travel to Tha Khaek, a small town with some colonial French buildings across the border in Laos. The area around Tha Khaek is known for its spectacular landscape with jungles, mountains, caves and waterfalls.

To do & see in Nakhon Phanom
Nakhon Phanom province houses a number of natural, cultural and historical attractions worth a visit. The illuminated boat procession or “fire boats festival” is held annually to mark the end of Buddhist lent (the rains retreat) and the return of the Buddha back to earth after preaching to His mother in the Tavatimsa Heaven. Late October or early November depending on the lunar calender, a procession of illuminated boats and rafts with scaffolding floats down the Mekong river in front of city hall, lighting up the river at night.

The Governor’s House is a French colonial style building, constructed about a century ago for the first governor of Nakhon Phanom. In 1955 His Majesty King Bhumibol Adulyadej and Her Majesty Queen Sirikit visited Nakhon Phanom and spend a night in the mansion. In 2008 the house was restored and turned into a museum. The first floor exhibits items relating to the history of Nakhon Phanom including old photographs, as well as an exhibit dedicated to the illuminated boat procession. On the second floor visitors can see the bedroom where the King and Queen spend the night, brought back into its original state.

The Governor’s House Museum is located on Thanon Sunthon Vijit on the banks of the Mekong river, North of the center of town. Opening hours are daily from 10 am until 5 pm, closed Mondays and Tuesdays. Admission is free. The Wat Phra That Phanom is one of the most highly revered Buddhist temples of North East Thailand. Its most important structure is a 57 meter tall elegant Laotian style chedi, painted gold and adorned with golden ornaments; its top contains 110 kilos of pure gold. The chedi enshrines a chest bone of the Buddha. It is believed that the chedi was first build in the 10th century at height of 8 meters. During later centuries is was rebuild, restored and raised to its current height of 57 meters. 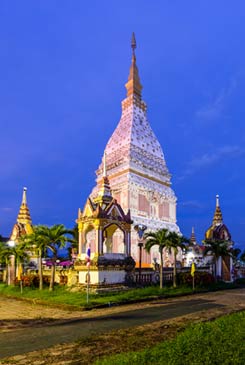 Another temple worth visiting is the Wat Phra That Renu Nakhon located in Renu Nakhon village. Dominating the area is an elegant 36 meter tall chedi constructed about a century ago in Laotian style. The structure is based on the chedi of the nearby Wat Phra That Phanom. The temple’s ordination hall enshrines a golden Laotian style Buddha image. 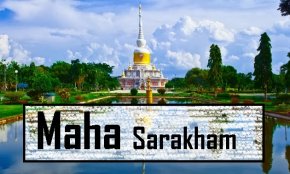 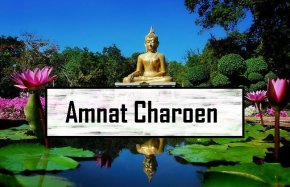 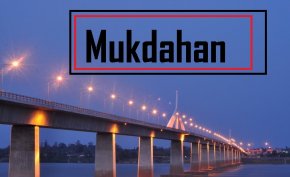 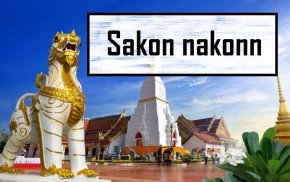